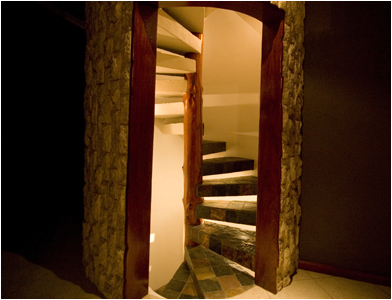 The Roundhouse Guesthouse is unique in shape and design. The ground floor offers 3 large, luxury suites. Two of these suites, the Cetecea and Astacus, are semi-circular whilst the other suite, Pinnepedia, is square in shape. The suites are entered from a gangway that connects to the rooms as well as the staircase to the top floors. The staircase is a major feature of The Roundhouse. The staircase is right in the middle of the house and is centered on a tree that was cut from a farm in the local area. The tree had to be cut in three places to position it in the center of the house. Another feature is our stone clad walls. Some of our suites feature coral stone cladding whilst others feature stone carved artwork in the lounge areas.

The 1st floor consists of our Carcharias suite, kitchen and office. The top floor is where guests enjoy breakfast, a couple of drinks and pure relaxation. The entire top floor is one big room. We call this room the bar area. The bar has a huge projector screen where you are welcome to watch sports, movies and more. Surround sound makes your viewing even more pleasurable.

The outside deck is where you will find our 8 seat Jacuzzi. Relax with a glass of wine whilst watching the sun set over the ocean.

The Roundhouse design was based on the traditional African Rondavel’s you see in the rural areas. The traditional houses are round with thatch roofs (although built with mud and straw). We wanted to create a modern version of this to give guests a unique experience with truly African feel. The house was designed on the computer by Dave who drew 3D models of the house and created nearly everything as a 3D model to get a real feel of what the finished product would look like. 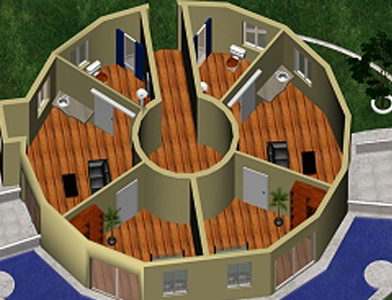 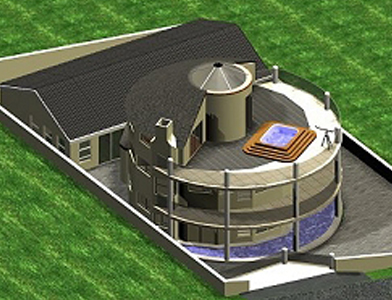 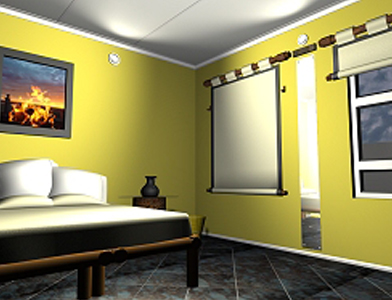 This was much fun and a totally new experience for us being able to design a place from scratch. We designed everything in the house and gave it extra special touches such as the Pine tree up the stairwell and lights in the walls illuminating the ceiling instead of ceiling lights. Even the interior and initial colours were designed on the computer. 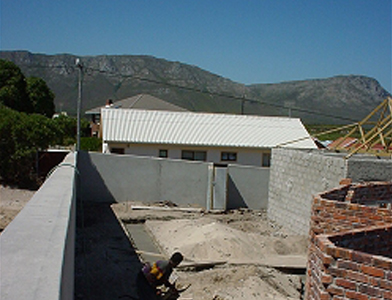 We moved down from Johannesburg in March 2002. Up until then the foundations had been started and building process was well under way.

We rented accommodation until the back apartments were finished and then moved in. Living on site had it’s advantages and disadvantages. It was good to be on site to oversee the building of the house but it was very stressful living on site with all of the sand and workmen everywhere. The only privacy we had was when the builders left the site at the end of the day and the sun went down.

As well as overseeing the building process we also worked hard on design ideas for the furniture.

There were a few hazards along the way as you can imagine! 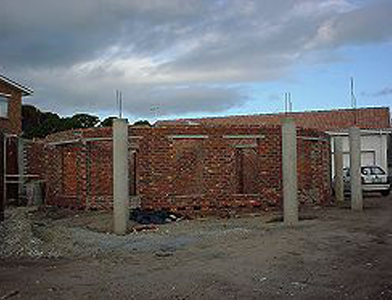 The design of the building made the whole process much more difficult as no one on the project had built a round house and this was a very unique shape and design. It was actually very easy to line up the internal walls as everything was referenced to the center point of the house.

The pillars were then positioned exactly in place using steel molds and one by one the molds were filled with concrete after careful aligning and positioning. 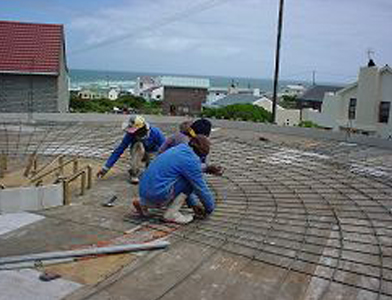 The deck was next. The deck boards had to be hacked to pieces due to the shape and the main headache was the shape of the Balconies. Due to the width restrictions of the plot the balconies had to be wrapped around the building starting from the sides and then tapering back in again on the other side of the building. This shape was very specific and the curve of the balconies had to be drawn from 6 different reference points.

The balcony shape was shaped using Asbestos board which was soaked and then curved into shape along the profile.

Then the steel work was laid as well as the electrical conduits and plumbing. 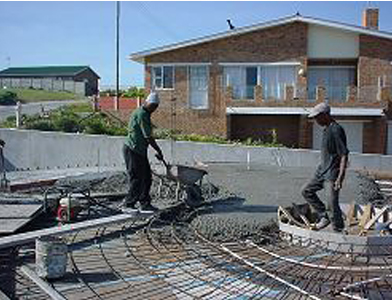 The decks were all poured by hand with manpower rather than machinery. This is the way things are mostly done in small towns in South Africa. We hired around 20 workers and they mixed and threw the concrete for the decks. We went on into the night and finally finished at 11PM.

We then had to wait a couple of weeks for the concrete to be strong enough to build on and then progressed from there. The second deck was the same as the first so this was quick and easy as we just had to repeat the ground floor process. 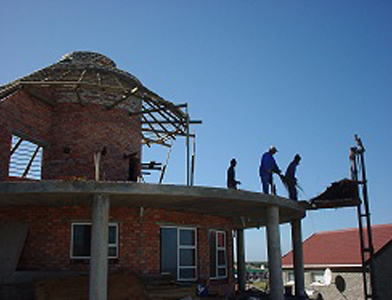 Then it was on to the interesting stuff, the bar and entertainment area! This was definitely the highlight of the building process as we could really appreciate the stunning views from the deck and the bar area.

One of the changes we made towards the end of the building process was to extend the staircase to the top of the building and build a ‘crows nest’ at the top. This provided us with unbeatable views over Gansbaai and walker bay. The thatch guys then arrived and began their work weaving the roof together. It was amazing to watch them working at such height without any fear. 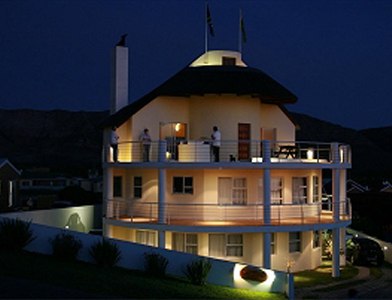 The all that was left was the painting, decorating and most importantly the lighting plus many weeks of finishing the house to our high standards before opening. We made all of our cupboards, curtains and put a real personal touch on every room in the Guesthouse. It was a very painful and exhausting experience but now we have forgotten about the pain and just have selected fond memories about this epic experience.

In 2007-08 we decided to renovate the guesthouse and add all of those expensive classy touches that we could not afford when building. We slowly worked through each room and after a year have ended up with a very special place. The rooms and Guesthouse is now designed with a stunning contrast of rough earthy walls and stone clad walls. The bedrooms are soft and warm with a thick carpet and living rooms in most rooms have stylish wooden flooring.

We are at the heart of tourism in Gansbaai and with the central booking office for Shark Cage Diving and Whale watching we will take care of your every need when here and give you the best experience possible during your visit.